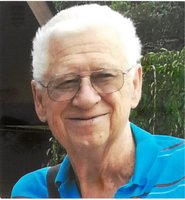 Funeral Services celebrating his life will be held 11:00AM Thursday January 31, 2019 at the Lambeth-Troxler Funeral & Cremation Services Chapel with Rev. Bill Foust officiating. Interment services will be held at 2:00PM Thursday at Alamance Memorial Park in Burlington. The family will visit with friends from 5:00PM until 7:00PM Wednesday evening at the funeral home.

A native of North Arlington, New Jersey, Bob was the son of the late Minnie Irene Bullock and Robert McGilvery. He would serve his country with the United States Navy Reserve for over fourteen years. He retired from Western Electric in 1989.

In addition to his parents, he also was preceded in death by his sisters Joan Reynolds and Caroline Jeffers.

In lieu of flowers, memorial contributions may be made to St. Jude Children’s Research Hospital at www.stjude.org/

Friends and family may sign, and view the guestbook at www.LambethTroxlerFuneralHome.com