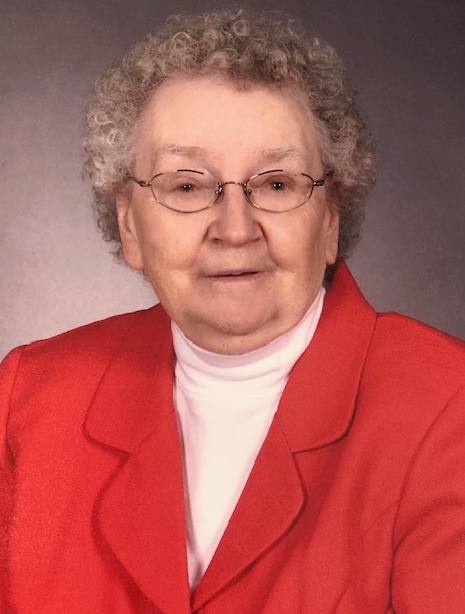 Odessa VanLopik Isley, age 87, passed away peacefully on December 27, 2019 at Coble Creek Healthcare, Twin Lakes Community.  She loved Jesus and is now rejoicing in His presence.

Odessa is the daughter of the late Martin VanLopik and Ada VanLopik James.  She was proceeded in death by her parents, her brother, Donald VanLopik and her infant sister Martha Lee James.

Odessa’s greatest joy in life was her family.  She loved cooking for them, traveling, and making crafts together.  She loved to crochet, color and complete word search puzzles.  She enjoyed sending cards to others and found that cards were her ministry.  She also enjoyed crocheting hats for Hospice patients and for Operation Christmas Child shoeboxes.

She was blessed to have a sweet relationship with Jesus.  She knew him as the most faithful Father and Friend.  Over the years she enjoyed her time with the Ladies Sunday School class and Caleb Club at Bethel Baptist Church.  Odessa was a passionate prayer warrior and loved to tell others about Jesus.  She was blessed with many sweet friends, including her special roommate at Twin Lakes-Mrs. Geraldine “Dinky” Smith.  They enjoyed many meals and Bingo games together.

A Celebration of her life will be held on Tuesday, December 31st at 1:30pm at the May-Foley Chapel, Twin Lakes Community, 3801 Wade Coble Dr., Burlington.  Burial will be directly after the service at Hawfields Presbyterian Church Cemetery.  The family will receive friends in the chapel from 12:30pm-1:30pm.  At other times the family will be at the home of her granddaughter, Christy Roessler, at 2204 Crescent Drive in Graham.

The family wishes to extend a heartfelt thank you to the Coble Creek-Twin Lakes staff for their excellent care of mother over the past two years, and especially the past two weeks.  As well as to Hospice for their loving and supportive services to mother and the family in her final days here with us.

Friends and family may view, and sign the guestbook at www.lambethtroxlerfuneralhome.com