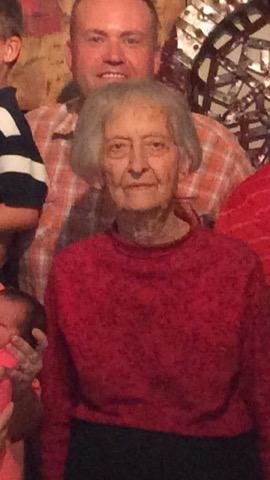 A Celebration of her Life will be held for friends and family at a later date to be announced at www.Pierce-JeffersonFuneralService.com.  Ruby was interred beside of her husband in Hickory Grove United Methodist Church Cemetery in a private family ceremony.

Ruby was the daughter of the late Viola Pearl McGee Idol and John Marion Idol. She was married to the late Junious Lee Ward, and in addition she also was preceded in death by her sisters, Lula Stephens and Ivey Beard; and brothers, Boyd Idol, Burton Idol, John Idol, Jr., and Porter Idol.

She was a longtime member of Hickory Grove United Methodist Church where she was a Sunday School Teacher and member of the Choir. She was retired from the former Sears Roebuck Mail Order center in Greensboro.

In lieu of flowers, contributions may be made to AuthoraCare/Hospice of Greensboro, 2500 Summit Avenue, Greensboro, NC 27405

The family appreciates, and acknowledges care given by all the staff of Heritage Greens, Options for Senior America caregivers, and the Hospice staff of Beacon Place.

Services for Ruby Idol Ward
There are no events scheduled. You can still show your support by sending flowers directly to the family, or planting a memorial tree in memory of Ruby Idol Ward.
Visit the Tribute Store

Share Your Memory of
Ruby
Upload Your Memory View All Memories
Be the first to upload a memory!
Share A Memory
Send Flowers